Hi folks! I’m back from four lovely days with the beautiful Pam. Did you enjoy the break from me? Well, brace yourself for another post in the Strong vs Weak Word series.

“Told” is another flat word. My novel is in the first person. Much (not all) of the dialog is narrated, meaning without quotation marks. So therefore, “told” might not be a problem for you. It was for me.

I examined the “tolds” and converted some of the narrated dialog into “he saids” and she saids.” However, not all.

“Told” jumps out at you and slaps you across the face. But “told” can also be stated as screamed, whispered, or ranted. Or simply as “said.”

Again, the difference is subtle. Losing “told” also gets rid of an unneeded pronoun. Let’s see if I can make sense of this with some examples.

Robin jumped for joy when I told her I made a pitcher of martinis.

When Robin learned I was pouring martinis, she ran three stoplights driving to my house.

Robin kicked down my door and I told her I would call the police.

I found my can of mace and warned Robin I have the police on speed dial.

She snorted when I told her I was serious about calling the cops.

Robin is like that when she wants a martini.

Robin threw a water balloon at me when I said the cops were on their way.

The single tear on Robin’s cheek told me she was at the breaking point.

What a basket case!

The single tear on Robin’s cheek let me know I better pour her a drink. 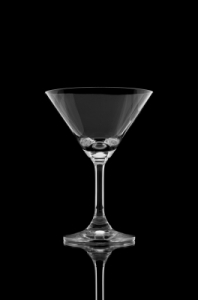 I told Robin she needs rehab.

Phew. She does need it.

I outlined the benefits of rehab while the intervention group filed in.

When Robin refused to leave, I told her she was obstinate.

I bet that didn’t go well.

Robin handcuffed herself to the table and I called her an obstinate fool.

Robin growled at me when I told her she needed to leave.

Someone needed to say it. Better you than me.

Robin growled at me when I dragged her and the table out the door.

Sorry for the numerous examples, but there are many ways to say “told.”

Also, note the legal use of the martini glass photo!