I bring you letter number four from Amanda.

But first, thank you all for your wonderful comments on her letters. I can’t wait for her to read them when she is granted computer privileges.

Hey Fajah! Hey Madre! (Fajah is Dutch for father, and NO, we are not Dutch. I also think there is an Austin Powers connection.) 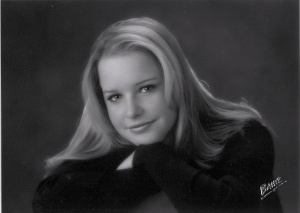 Our tough-as-nails daughter cleans up nicely, don’t you think?

We are learning the basics like DO NOT MOVE in the position of attention. We used to do that in karate and the instructors would try to make us laugh. Here, if you move you are called a “dumbass” and have to do a million push-ups.

(Amanda has her black belt in karate.  Again, not bragging, just stating the facts.)

They are teaching us to work as a team, not as an individual. A lot of people have trouble with that and only look out for themselves. Me on the other hand, the thing I’ve gotten in trouble for, is thinking critically. I anticipate what will be needed next and while most of the time I’m right, I shouldn’t be doing anything until I’m told.

Things are getting better because we are starting the real Army stuff, (Remember, Amanda did 4 years of ROTC.) and there’s less stuff for them to screamed about. (Yes, Mom, the screaming is just like the movies. They call us names I’ve never heard of. It’s kinda cool. My Drill Instructor is super funny and most of the time he’s actually making fun of you.)

I told you about the obstacle course competition against the other platoons. I was selected to be on the team that represented my platoon. We didn’t win though. One of the girls got “tired” and slowed way down. Doing the course the second time was 4-times as hard. First, you’re smoked from doing it the first time . . . and it is a f**king competition so it is all out.

(Amanda gets her competitive spirit from her dad, NOT me.)

Sundays are our days off, kind of. The morning is for church if you go. Since I don’t, I get personal time. I got paper out to write to my sisters but wrote two sentences before passing out. After lunch is “Area Beautification” so we clean and scrub. Definitely not like the movies. We sweep and mop of course, but not on our hands and knees.

Yesterday was, in my opinion, the best day here.

(Wait til you read her definition of the “best day!”)

We had a 0445 wake-up call and did intervals on the track. Then we put on our rucksacks and marched three-miles to the “gas chamber.”

(The gas chamber is where soldiers are taught to correctly wear and use preventive biological equipment. Then they are exposed to a controlled concentration of gas – thereby building confidence in dealing with and identifying a biological agent. Doesn’t THAT sound like fun?)

I’ve done it before so it is no big deal. It just burns like a son of a bitch. Then we marched to “day land navigation,” ate dinner, and then did “night land navigation.” (They use a map and compass to navigate to get to “points” in the field.) My team came in first! We marched back to Bay and got to bed at 0145. We slept in this morning though!  The wake—up call was at 0645!

(Not my idea of sleeping in.)

We go on our first Field Training Exercise soon! I don’t really know what to expect. It is only one night in the field. Everyone is calling it camping. It’s not camping, well it is, but is the Army. The Drill Instructors hate hearing it called camping. Lots of walking I expect.

We eat three meals a day. No more, no less. I find myself starving at each meal and I eat a ton, but am starving again when we hit the rack.

Glad to hear things are good at home. Also, sorry about the swear words. We can’t curse in front of the Drill Instructors and I’ve been frustrated.

(Swear away Amanda! I don’t blame you.)