I witnessed the magic of the written word today.

Did the words end world hunger or bring peace in war-ravaged lands? No.

Did the sweet cooing of undying passion conveyed in a love letter win another’s hand in marriage? No.

Did a sincere and sorrowful note of apology mend a family torn apart? No.

So what happened, you ask?

It was the mysterious way that the reading of words transformed my mom’s state of confusion and agitation, to one of coherence and peace.

For those of you who have stopped by here over the last few months, you probably caught wind that my hale and hearty 89-year-old dad became gravely ill in early September. He has been in and out of hospitals and nursing homes since then. He takes one step forward in his recovery and then gets cut off at the knees with a new and serious health condition. It has been a frustrating, scary, and all-consuming experience for my family and my sweet dad. We almost lost him countless times.

The aging process doesn’t deal an even hand. My dad’s body is failing, but his mind is sharp. My mom is healthy, but her mind is shot. She has Alzheimer’s.

So, while Dad has been convalescing, Mom has been living with my sister and her husband. They get, as my mom would say, “leather medals” for what they have done for her. I know my dad’s worry about mom has impeded his recovery. Dad agreed that the time had come for Mom to move to a place appropriate for her needs.

I’ve been in Portland for a week to find such a place. I found a charming apartment for her in a facility near my dad. The staff there deserves a “Do Not Pass Go, Collect a Million Dollars, and Go Straight to Heaven” card.

After many long and round-about conversations with Mom and showing her how cozy the apartment is, she agreed to live there. She loved the place.

Mom became angry, bitter, and wanted to leave. She transformed to addled, disoriented, and incoherent. There was no reasoning with her. After physically stopping her at the door six times, I was near tears. Because I am prone to melodrama, I also saw my life flash before my eyes.

So what did I do?

I said, “Hey Mom, why don’t you sit here and read the welcome packet from the apartment manager?” Redirected, she plunked down and read every word of the packet out loud. At the end of the last page, she said, “Isn’t this place wonderful!? They thought of everything. I’m so lucky to live here.”

I can hear you all saying, “Yeah, yeah, yeah . . . so get on with it Robin. Where is this so-called magic of the written word you were talking about?”

Bear with me. I’m getting to it.

Sure, the welcome packet included interesting things like the times meals are served and the activity schedule. But it also read chapter and verse from the state and federal regulations governing nursing home facilities such as staffing levels, posting of job titles, and nutrition standards. Pretty dry stuff.

Mom’s brain cells were rattling like the balls in a pinball machine until she read the packet. I am not a neurologist, although I play one on TV, but I know it wasn’t what was written in the packet that reassured her.  It was the process of reading the words that calmed her brain. Her synapses were misfiring and reading realigned her brain waves. Mom went from agitated, to almost catatonic, to functioning with appropriate responses and reactions.

Granted, the words Mom read today were not in beautiful cursive as we discussed in my famous (or should I say infamous) “Is Cursive Handwriting Dead?” post. But they were words.

Okay, okay, okay. My point is that I think reading helps us orient to life, brings us peace, and calms the savaged soul. At least it did today with my mom and her cruel companion named Alzheimer’s. 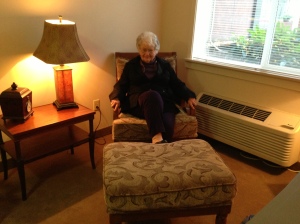 Mom settling in while I look for a bottle of scotch to sooth my nerves.