Before I get started, I’d like to say one word about the earthquake in Nepal. “Tragic.”

In a daring move to bolster twelve-straight quarters of sagging sales, Abercrombie & Fitch is telling their overly-photoshopped male models to put on a damn shirt and cover-up those rippling coconut-oiled six-pack-abs.

It is about freaking time.

Those ads were selling nothing but sex to teenagers. I saw a gigantic billboard of a young man who was seductively leaning against a wall. His head was cropped off and he was bare-chest. Ironically, the only Abercrombie clothing shown on the billboard was two inches of his boxer shorts and three inches of his jeans with a semi-open fly.

Who was the target audience of that ad?

Certainly not teenage boys in the market for jeans and undies. . . but it drove prepubescent girls to plead with their mom to drive them to the nearest mall.

When our (now adult) daughters were at the impressionable ages of 10, 12, and 14, Abercrombie was THE place for kids their age to shop. If you didn’t wear Abercrombie, you were likely to find yourself ostracized and have to eat your lunch all by yourself.

As their mother, it was painful to witness the peer pressure.

I fell victim to our girls whining, begging, and crying and would take them to Abercrombie. I would bravely enter the store for a good two- to three-minutes and then quickly exit to find a bench where I would wait out the ordeal in peace. Unfortunately, the bench was never close enough to an establishment offering adult beverages.

Why would I race out of the store in search of a bar?

1. The music in Abercrombie is louder than an Iron Maiden concert with the amps turned to roughly the same decibel as a fighter jet upon takeoff.

2. They have scent machines that infuse the air with a sickeningly sweet Abercrombie perfume. It makes it hard to breathe and their trademark scent stays in your nose for days.

3. The clothing is ridiculously expensive and so poorly made that even teenagers in developing countries would say, “I’m not wearing that crap even though I made that stupid shirt.”

4. Larger-than-life photographs of scantily clad young men and women throughout the store make even Olympian marathoners have body image issues.

5. The salesclerks are the Abercrombie & Fitch version of the Stepford Wives. Identical, beautiful, and with a combined Body Mass Index equivalent to that of Kate Moss.

6. At special events, or at the drop of a hat, Abercrombie festoons their stores with shirtless male models who mingle with the customers. It is like a teenage version of Fifty Shades of Grey. As they say, sex sells.

7. Also, it was rumored that Abercrombie doesn’t make their clothing in sizes larger than “anorexic” because they don’t want anyone larger than Twiggy wearing their brand. It would ruin their image. The CEO vehemently denied the allegation, but I know from firsthand experience that Abercrombie’s size “extra-large” looks like it shrunk in the dryer.

Let me tell you the real reason Abercrombie’s sales have dropped so drastically . . . like many other parents, I was the one with the credit card in my pocket and was ready to spend money. But it was so bad that I had to leave the store (see Numbers 1 through 7 above) and shopped elsewhere.

They marketed to the kids, but Misters Abercrombie & Fitch forgot who might be paying for their merchandise . . . the parents. The girls may have resented it at the time, but I bet if you were to ask them today, they would completely agree with me.

I’m not a prude, but I applaud Abercrombie’s decision to stop gratuitously targeting young men and women with racy ads and catalogs, eye-candy salesclerks, and beefcake models.

According to a retail research firm, “Abercrombie & Fitch has to find its niche. You are not going to see totally wholesome, but I think the era has passed it by. They need to do something different.”

Thanks goodness. To bastardize a line from my favorite movie, Young Frankenstein, “Those abs in the ads are Abby Normal.”

My uncle did some modeling in the 40s. Now THAT is a what a male model should look like!

As an encore, my next rant might be about Victoria’s Secret and what they are doing to women’s idea of what their bodies should look like.

The Sacramento Kennel Club puts on a two-day dog show every spring. I’ve gone to it two or three times and I have a big goofy grin on my face the whole time I am surrounded by all that doggone fun.

How could I not be grinning after seeing a face like this one? It was puppy-love at first sight. 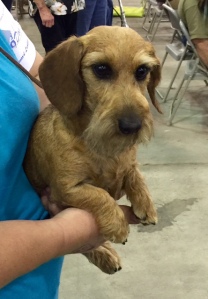 The American Kennel Club, like many clubs are wont to do, has rules, regulations, bylaws, codes of conduct, policies, standards, statutes, guidelines, procedures, requirements, parameters, and the like. Every aspect of being dog-crazy, er, I mean dog showing, has a rule to go along with it. With all that writing and reading o’rules, one wonders when they have time to breed, train, handle, and show dogs.

There are also many unwritten rules that dog show participants must adhere to.

I set before you what you need to know if you want to enter the heady world of dog showing without making rookie mistakes and getting laughed out of the show ring.

Your dog must be insanely adorable.

You must tote around copious amounts of dog paraphernalia. Consider hiring a Sherpa.

Dog grooming combs must be stored in your hair.

Frequently use a drool rag to wipe off slobber. Dog drool and concrete floors are a deadly combination. 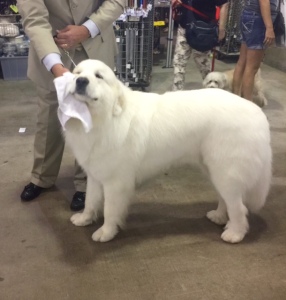 Or feel free to humiliate your dog by making him wear a silly bib.

Dog tattoos are a plus. Judges dig ’em. 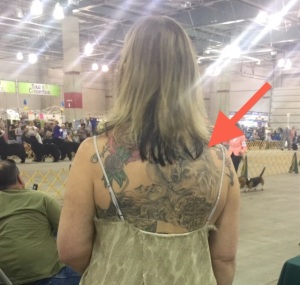 Mom jeans and sensible shoes are a must.

Bring your checkbook so you can:

Shop at the dog leash emporium.

Hire an animal communicator. I kid you not.

Book a massage appointment for your dog to relieve his stress so he performs in the ring to the best of his ability.

Attend beauty school so you know how to properly style your dog’s hair . . . um, fur.

And finally, this is what the dogs must do:

Honestly, if you have a chance to go to a dog show, I highly recommend it. It is DOG-some.

My husband is a lucky man. I can hear you saying, “Why, yes he is! He is married to you, isn’t he?” That isn’t the only reason he is lucky. I came close to coming home with about two dozen dogs.

But this guy, my Sir William Wallace, would be jealous if I did that.

“Don’t even think of bringing home a dog, you big cheater!”

In Search of Beef Stroganoff, self-publishing

No, I am not a survivalist predicting the end of the world as we know it, although I do happen to look fetching in mossy oak camo and make a delicious tree bark stew.

I can hear a collective sigh of relief from all you bloggers out there about not having to listen to me moan and complain and rant about how the editing process is endless. I could always find sentences in my manuscript I wanted to tinker with, things that needed to be added, sections to toss on the garbage heap, or scattered typos left in the wake of my editing.

My dear friend and fellow blogger, also happens to be a librarian with a fancy schmancy Master’s Degree in Library Science. She read a draft of In Search of Beef Stroganoff over the summer and gave me fantastic feedback, asked hard questions, and told me she HATED the ending. I took her comments to heart et voila (how French of me), the manuscript was in a state where I was happy with it and could quit gnawing on it like a pit bull. I could finally say . . .

Quit picking at it.

There is no earthly reason to change the word “happy” to the equally boring word “glad.”

I honestly didn’t think that day would ever come.

I sent the manuscript off to a talented and knowledgeable editor, who many of you know as the fabulous Madame Weebles of blogging fame. She is an editor with a keen eye, nose for accuracy, delicate touch, hears when dialog is stilted, and chewed up and spit out sentences that didn’t ring true. She used all five senses while editing my manuscript and I think she used her sixth sense as well. She gave the novel the polish it needed. The story is the same, but she helped me smooth out more than a few bumps.

My gifted and artistic (and may I be so bold as to add, beautiful) daughter is a graphic designer extraordinaire. She created a stunning cover for the book, but she won’t let me reveal it . . . yet. Because she is like her mother, she is never happy until something is perfect. She wants to play around with the design some more, but in my mind, it is already perfect. It captures the essence of the story.

Because, as I said, I leave typos in my wake when I edit, the manuscript is now in the capable hands of my best pal. She can spot a typo at a hundred yards. And by the way, she has found a few. Once she is finished, it is publication time.

Woooooooohooooooo! I will soon be doing a happy dance and I hope you all join in!

After doing much handwringing, gnashing of teeth, and hours of research, I decided to self-publish using Lulu Publishing Services. Have any of you used them? If so, how did it go? From everything I’ve learned about Lulu, they are author-friendly, you can do eBook and print book versions, and they don’t demand your first-born child as payment.

I considered trying to get an agent but it seemed like an impossible dream. The numbers are against anyone who would like to be traditionally published, except if your name happens to be Stephen King. There are so many talented writers out there. My goal is to hold a copy of my book in my hands, not to be rejected by an agent.

Stay tuned. I’ll be around the blogosphere more now and will try to not bore you with the details of getting my book in print. But I can’t make any promises.