Nancy Drew, girl detective, turns 85 today. She sure has aged well. She doesn’t look a day over 18. 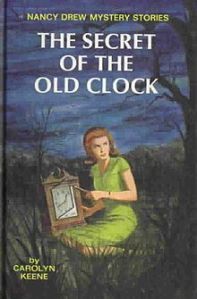 Why the heck is there a
clock in a field?
Image Credit: Wikipedia

As a preteenager, I was a Nancy Drew mystery groupie. I would devour a Nancy Drew book, sometimes two, in a day. I read every copy in my junior high school library, saved money to buy my own, and swapped copies with my equally nerdy best friend. My exasperated mom said to me, “For Pete’s sake, put down that book and go play outside!” I foiled her attempt at making me get exercise and took my book to the park and read it there.

Jenn Fisher, president of the Nancy Drew fan club (there is a fan club?) said she likes the games because they put the player in Nancy’s shoes and into the crime-solving action. The chief executive of the maker of the video game, Her Interactive, said that she likes that girls have their own series of games. Let’s face it . . . it is a male-dominated world of video games bent on pretending to blow things up and kill people. On a side note, the last video game I played was Pong and I might have been reading a Nancy Drew book at the same time.

The maker of the Nancy Drew video games estimates that 90 percent of the games’ players are girls. I bet the other 10 percent is Bruce Jenner.

All jokes aside, the company also said they get a lot of fan mail from their gamers who say they the Nancy Drew video games have been inspired to make their own games and get involved in science, technology, engineering, and math.

Wow! A video game can do all that and solve mysteries too? Way to go, Nancy Drew! For being an old lady, you rock!