My husband and I forked over half of the money in our Swiss bank account and purchased tickets to see the Eagles in concert at the Forum in Los Angeles. We wanted to see them in concert before they split up for good or kicked the bucket.

I’ve been a fan of the Eagles for more years than I can count, and I can count pretty high. The soundtrack to my high school years is an Eagles playlist.

Picture this:  I’m 17-years old, my girlfriend and I are driving home from a day at the beach, and sand is stuck to our Bain de Soleil smeared skin. With the top down on my mom’s Mustang convertible, our bikini-clad nubile bodies turned heads while we cruised home. “Hotel California” was blasting from the car’s tape deck and we were singing our hearts out until people started throwing sharp objects at us. Ah . . . those were the days.

The Eagles put on a great show and you almost forgot that they are senior citizens. But we were reminded of their advanced age when they took a 15-minute intermission for a restorative swig of Geritol and a light rub-down of Bengay. Gone are their days of a swig of Jack Daniels and rubbing cocaine on their gums during intermissions.

The only disappointment about the concert was that they didn’t play my favorite song, “Desperado.” I think it was because they forgot the lyrics.

Looking around at our fellow attendees, I was struck by something odd. If you want to feel like a youngster, go to an Eagles concert. Sure, there were a few young pups in attendance, but the majority of the crowd was comprised of people in their 50s, 60s, and 70s. And beyond. Think walkers, canes, and wheelchairs

During the intermission, a young girl (I’m guessing 10-years-old, or so) a few rows in front of us stole my heart. As soon as the house lights went up, she whipped out her book and began to read. I was dying to ask her what she was reading. That, my friends, is an avid reader. 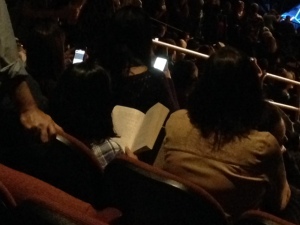 ~That must be one good book!

The ever rocking-rolling Eagles ended their encore with “Take it Easy.” The song is 42-years-old and the band may be pushing 70, but the song made a young girl put down her book and listen to greatness.